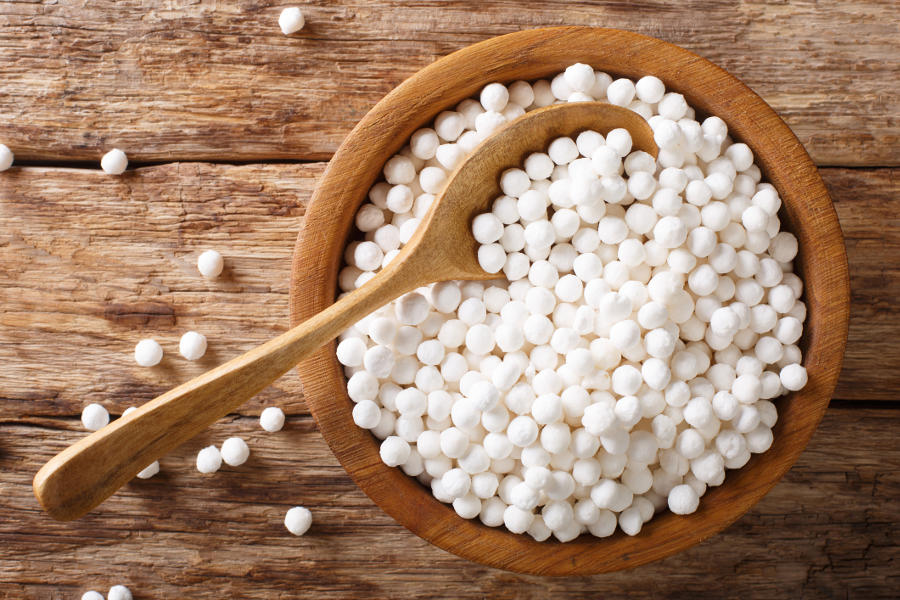 Cooking with sago has gone out of fashion but made its way back onto our plates. Sago is a wonderful means to thicken soups or to create a refreshing dessert from fruit juices. But also as an ingredient for desserts or soups, sago is a good vegan alternative. Therefore, more and more nutrition-conscious people and vegans are rediscovering this miracle pearl.

It is tasteless and odorless, so sago can be used anywhere as a binder. When dried, they are small, hard, white beads. After cooking, the beads become transparent.

The small, 1 to 3 mm sago grains are formed when stiff starch dough is passed through a sieve onto a heated metal plate. The heat causes the outer skin to gelatinize, allowing the granules to retain their shape during cooking.

Mainly perlsago is used for desserts or soups. It has a binding effect and provides a firmer consistency of the dishes. To use it, you should keep a few things in mind.

Add the sago to the soup or for fruit desserts to the fruit juice and cook everything on lowest heat for 30 – 45 minutes.

Do I have to soak sago before cooking?

You should not wash or soak sago. Sago is made of starch, so any time it comes in contact with water before cooking, the sago (which are actually starch powder balls) will dissolve!

Sago must be placed in boiling water. In this way, the outermost layer of the sago bead is cooked immediately and forms a seal that maintains its shape.

Sago must be stirred constantly during the cooking process. This takes about 20 minutes until it is cooked to a glazed consistency. Otherwise, lumps will form.

How long does sago need to cook?

Depending on the use, the cooking time varies.

Where does sago come from?

Originally, the name of the starchy beads comes from Papua New Guinea, which suggests the origin. Here, perlsago is part of daily life for the production of bread patties. It is therefore not surprising that sago means “bread”. In the 19th century, sago was brought to Europe by Marco Polo and used for the first time.

Sago consists faat entirely of pure starch, making it a carbohydrate. It contains only small amounts of protein, fat and fiber and virtually no vitamins or minerals.

Where can I buy sago?

Sago can be bought in well-stocked supermarkets or ordered online.