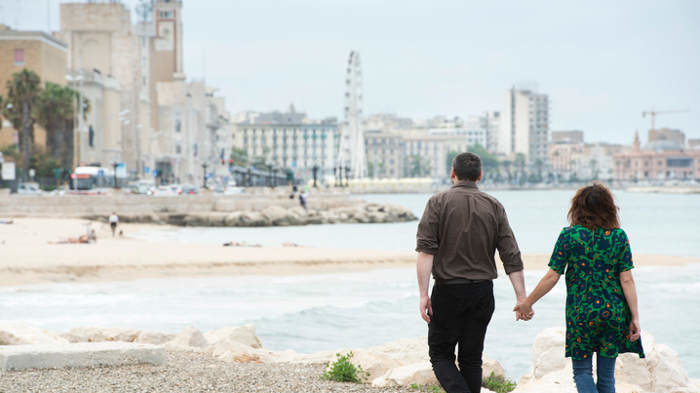 Bari, the beautiful and colourful city in the South of Italy, has much more to offer than just culinary diversity and impressive beaches: The city is extremely authentic and amazes its visitors with Italian temperament and breathtaking scenery.

Here you can still feel the real Italian flair and explore caves and beaches undisturbed. The original Italy has not had to give way to the tourist strongholds here, and the Baresen’s lifestyle, as the inhabitants are called, shows in all its many aspects.

On the one hand, Puglia’s capital is like a self-contained village, while on the other hand it is modern, culturally diverse and culinarily interesting.
Bari in Italy is surrounded by wonderful, small coastal towns that are within easy reach. Places like Polignano a Mare, Trani and Monopoli offer their visitors splendid views from rocky shores and genuine glimpses of the Mediterranean lifestyle. Sun lovers will find a variety of beaches, sand or rocks and deep blue water around Bari in the hot southern Italian summer.

The history of Bari, Italy

Bari belongs to the oldest cities in the world. The first settlement was built around 4,000 years ago and since then the city has had a rich history. The Greeks brought the first settlement to life and fishing as well as trade flourished in “Barion”. As the centuries passed, the city was conquered and abandoned. The Romans took the city from the Greeks, only to lose it a few centuries later to the Teutons. Saracens (Arabs) took over the city twice and passed it on to the Byzantines.

Under Frederick II the city flourished and remained a thriving metropolis until the 19th century. After Bari was also partially destroyed by German bombs in World War II, construction began which promoted the importance of the city in southern Italy.

Bari has two sides that couldn’t be more contrasting: the new town with its impressive town houses in straight streets and the medieval old town of Bari Vecchia, which is enthroned at the top of the town, has winding lanes and is completely bordered by the sea on one side. Like a peninsula, Bari’s old town rises into the Adriatic Sea and makes it easy for visitors to get lost in the narrow streets. Many monumental buildings have been restored in recent years.

Between these two parts, there is the wide Corso Emanuele II, flanked by shops and one of the main traffic routes of Bari. Then there is the Lungomare Marcantonio Colonna promenade with its characteristic three-armed lanterns, called Lungomare by the locals. Here the Baresen go for a walk, eat a snack and couples sit in the evening on one of the many benches and watch the sunset.

Bari in Italy: the facts

The weather in Bari

The climate in the South of Italy is warm and mild. During the summer months there is hardly any rainfall, while the winter months are rather humid. Temperatures in Bari can rise up to 30° in summer, but the high humidity makes it feel warmer.

The most important sights in Bari

A brief overview of the most famous sights in Bari:

The pilgrimage church in the heart of the old town is impressively large and the pilgrimage destination of many Roman Catholic and Orthodox Christians. Here is the reliquary tomb of Saint Nicholas. In addition, the basilica is a true gem and is considered the founding building of the Barese Romanesque. In the church museum you can see more works of art and an impressive collection of old candles from the 12th century. In case you are very much into candles.

In the upper part of the city begins the interwoven old town, which is bordered in the north by the sea. Here, small shops alternate with hidden cafes. The local life of the Barese can be felt here like nowhere else.

Impressive and powerful, the castle thrones in the West of Bari old town. It was built in 1132 by King Ruggero II and was used for a long time as the main checkpoint for arrivals to the town. It is also home to the famous Archaeological Museum, which displays historical, architectural and artistic artefacts.

As one of the optical landmarks of the city of Bari, the cathedral is a marvel of 12th century Romanesque architecture. The most important church in Bari is often the site of weddings and the white façade with its three wooden portals, the large rose window and the round-arched windows is world-famous.

Friends of the theatre will get their money’s worth at the Teatro Petzuzzelli. The largest private theatre in Europe is also one of the five largest theatres in Italy. From the inside and outside it is impressive and also worth a visit beyond the shows.

The Picture Gallery is home to many exhibitions of modern and old art. It was opened in 1928 and houses unique exhibits and a large collection by the painter Corrado Giaquinto.

Bari and his culinary delights

Puglia’s rich cuisine includes traditional recipes that are handed down from generation to generation. The dishes are vegetable-based and often contain one of the many local cheeses. The fruity and full-bodied wines of the Puglia region are usually served with it. Baresian olive oil also has a unique taste, dominated by a bitter note. There are still many small olive growers here who have joined together to form a cooperative and produce top quality regional olive oil.

Typical Baresian specialties are among others:

While strolling through the narrow streets of the old town, you can still watch the local women making the ear-shaped pasta orecchiette by hand. They take pride in the tradition and like to give a few pieces as souvenirs.

Around Bari there are many impressive natural monuments and caves. The lively sea has created interesting formations from the rocky coast. Undoubtedly the most famous natural attraction are the caves of Castellana. They are the largest caves in Italy and are easily accessible for sightseeing. Around the caves there are many hiking trails that lead through the untouched nature.

There are several ways to get to Bari in Italy.

Going out in Bari

Bari’s old town is also a meeting point at night. Here you will find many bars, restaurants and cafes, where there is a lot of activity even at late hours. Starting at the Piazza del Ferrarese, you can party, drink and dance in the maze of streets. There are also many bars and restaurants around the university in the new part of Bari. In the streets Corso Vittorio, Via Nicolo Putignani and Via Abate Giacinto, the density of bars is especially high.

Tip: While for us “Bars” are places where you can drink alcohol in a cozy atmosphere and which are open until late at night, bars in Italy are rather places for coffee and small snacks.

Shopping tours with Italian flair can be done in the shopping paradises of the new town in Bari. It’s no coincidence that Italy is famous for its fashion, chic shoes and handbags. Here you will find elegant boutiques as well as H&M. In the pedestrian zone Via Sparano you can stroll, drink an espresso and shop to your heart’s content. You’ll find cheaper shops along Via Manzoni and Corso Cavour. Outside the city there are many shopping centres and outlets.

Tip: A special highlight for shoppers from June to mid-September are the summer sales. All shops offer reduced prices during this time and you can get real bargains.

While the ancient city of Bari and its surroundings attract travelers with its many historical landmarks, small tourists attach importance to a different kind of entertainment. Bari also has a lot to offer for a holiday with children.

Among other things, these activities are available for children in Bari:

We are very impressed by Bari. This big, small town has much more to offer than it seems at first glance.  Follow us on our Bari magazine, where we present all the details and secrets of Bari.